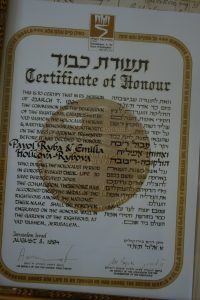 The Righteous among the nations Is the reward for non Jewish people who risked their own lives during the second world war so they could save the lives of persecuted Jews. Rewarded people are given a memorial medal and a certificate and their names are engraved on The Wall of Honour in the garden of the righteous in Yad Vasem in Jerusalem.
Nominations for this award are given by those who were saved or by their family members. All nominations are carefully looked in to, and recorded in detail. 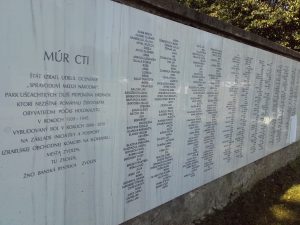 By February 2018 we had 584 people from Slovakia listed in The Righteous of the nations. Their names can be read on a memorial in the Park of noble souls in Zvolen (Park uslachtilych dusi). This memorial is a memory to martyrs of the holocaust and also to brave Slovaks who helped persecuted Jews.

The stories of the saved peoples memories are recorded in the Encyclopaedia of the Righteous of the nations which has been published jointly by the Museum of Jewish culture and the Museum Yad Vasem.

On Radio Slovakia every other Sunday at 10:05am, is broadcast Encyclopaedia of the righteous, where the stories are told, of people who have received the award. But also I am looking for authentic witnesses from families who helped Jews during the war, who have not yet been given an award. From 102 stories that I worked on up until June 2018, 50 have been awarded and 52 have not yet been awarded.

Slovak Righteous Among The Nations

My thanks go to the Israeli Embassy in Slovakia for provaiding up to date information.