About meeting one humble and precious woman.

“Do come Mrs Mozolová, but you will have to make coffee for yourself”, the woman’s voice on the phone informed me.

“Gladly,”I replied, and in a few days I am sitting in the car. My destination is Stará Turá.

House by the road. I am pressing the doorbell, nobody is opening and I am ready to call, maybe the doorbell is broken, but suddenly I hear a key in the lock. Anna Malárová is opening the Door.

I am slowly walking behind her to the kitchen. She walks with two crutches.

As a child she grew up in her grandmother’s house, but here and there she lived with her parents where her younger sister also lived. In the autumn of 1944 she was at home collecting plums. A man came to them wanting to buy plums but she didn’t pay much attention to him because she was chasing her sister in the garden. About two or three months later, there was snow and she was unwell. Her mum left her at home on her own as she needed to sort out a few things in the town. She started to cry. Suddenly, the door opened and there in the room from nowhere was the man who had wanted to buy plums. He wanted to help her, she refused and continued to cry. Later on, her mum explained the situation to her about Mr Ladislav Klein who was hiding in their house and she didn’t give away the secret even to her grandmother who she loved very much.

Mrs Malárová was telling me her story. She was a little girl then and today she is 81 years old. Today she continues to be visited by Tomas Klein who is the son of Ladislav Klein the man her parents saved during the war.

I am meeting with Mr Klein in Bratislava, it is so difficult for him to speak at the time as he knows that without the Durec family (Anna’s parents) he would not be her today himself.

A few months later we are meeting with Mrs Anna Malárová in her house in Stará Turá. Present are, Mr Klein and his wife, a team and director of RTVS and I as we meet to record her story. We also find the little house where the father of Mr Klein had hidden in the old-fashioned bread oven. The house is still standing completely unchanged as a silent witness of the events that happened seventy years ago.

I am saying good bye to Mrs Malárová with a thankful heart that I could meet her. A woman with a good heart but with a difficult life story.

After that I call her one more time just to say hello.

From the words of Thomas Klein on facebook I have learnt that Mrs Anna Malárová has passed away.

I feel like somebody close to me has left. In her memory I am starting this website and I am writing these lines so we do not forget that the stories from the second world war were not only about the bravery of grown-ups, but also children who understood that the only truth is love. Love to your neighbour. 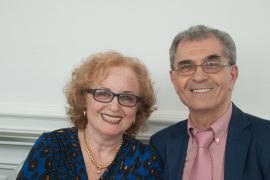